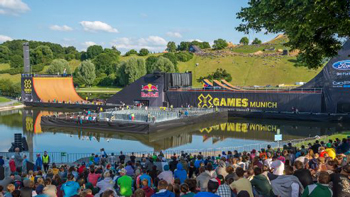 "We are proud to have run world-class competitions for both the athletes and spectators; however the overall economics of these events do not provide a sustainable future path," ESPN said in a statement.

According to ESPN senior vice president for programming Scott Guglielmino, the cancelation of the international events was not a reflection of the action sports industry as a whole or its popularity in other countries.

The network said domestic X Games events in Aspen, Colo., and Austin, Texas, will be held in 2014, as scheduled.

The X Games is the longest-running event in action sports, featuring competitions in snowboarding, freeskiing and snowmobiling in the winter and skateboarding, BMX, motocross and rally car racing in the summer. The event has featured some of the most historic feats in action sports history, including the first double backflip on a dirt bike, landed by Travis Pastrana in 2006.

ESPN announced the expansion to six sites in April 2012. With the expansion came new events, including Mountain Bike Slopestyle, Women's Skateboard Park and Gymkhana GRID. The global tour also included a new emphasis on music and culture, with film screenings and concert headliners such as 50 Cent, Awolnation and Major Lazer.

The international events in 2013 provided some milestone performances. In Tignes, Iouri Podladtchikov landed the first-ever YOLO Flip in Snowboard SuperPipe. In Foz do Iguacu, Jake Brown landed the first 720 ollie in Skateboard Big Air, and in Barcelona, Alana Smith surpassed Shaun White to become the youngest X Games medalist ever with her second-place finish in the debut of Women's Skateboard Park.

"I think we’re close to announcing some additional sports [at X Games Aspen], and that’s something we’re excited about working with Aspen Skico. And we’re looking to solidify a long-term home for that event as well, so we’re really excited about the possibilities and excited about growing our two U.S. events further, and adding to the heritage of both," Guglielmino said.

Next year will be the first time Austin hosts a summer X Games, ending the event's 11-year tenure in Los Angeles.

"I think from an X Games perspective, the X Games is in fantastic shape. We have the Aspen event that we’re going to add some sports to, we’re moving to a new summer home in Austin," Guglielmino said.