Lake Forest, CA – Last night, etnies threw a party for Ryan Sheckler, at the Sheckler Foundation’s training facility to celebrate their partnership that has spanned 15 years!  When Ryan was seven years old, he was already an innovative skateboarder, inspiring guys twice his age and accomplishing tricks some people only dream of. etnies took notice, welcomed him to the team and hasn’t looked back.

“I’m stoked to be a part of etnies for 15 years. Loyalty is a word that gets thrown around so often, but when you step back and look at the big picture, you see that not many stay true to it. I glad that we have,” said Ryan Sheckler.

In true skate fashion, etnies team riders and many others kicked the party off with a session in the skatepark.  The event’s more than 250 attendees included Ryan’s family, friends, media, and etnies reps from all over the world. 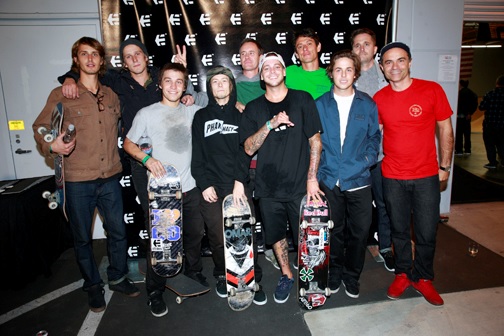 All of those in attendance got to see what 15 years of loyalty looks like in the form of a photo exhibition illustrating Ryan’s history with etnies that showcased a selection of photos by some of the best photographers in the industry.  The photographs that were auctioned off to benefit the Sheckler Foundation included iconic shots by Atiba Jefferson, Chris Ortiz, Herb George, Rick Kosick, Sam McGuire and Shad Lambert.

After checking out the gallery, the ones who felt inspired by the art headed out to the training facility to get a feeling of what it’s like to be Ryan for a night by shredding his personally designed skatepark. Those on the sideline weren’t let down either, Red Bull Vodkas, Imperial Beer and Fred Water were flowing, as the upbeat sounds of The Blackouts, kept the party going.

Keep the conversation going with the #SHECKS15YEARSSTRONG hashtag.

About etnies
Established in 1986, etnies is the first skateboarder-owned and operated global action sports footwear and apparel company. etnies not only pushed the envelope by creating the first pro model skate shoe, but it pioneered technological advances and changed the face of skateboard footwear forever. Today, etnies’ vision, led by owner and skateboarder Pierre-André Senizergues, is to remain the leading action sports company committed to creating innovative products that provide the most style, comfort and protection possible.  etnies stays true to its roots by sponsoring world class skateboarding, surfing, snowboarding, moto x and BMX teams and continues its dedication by giving back to each of these communities.  For additional information, visit etnies.com.