GEAR: Mio Global Teams Up with TomTom to Make Heart Rate Training Available to All 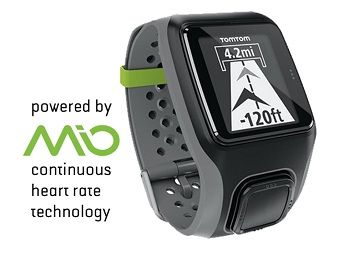 Mio Global Teams Up with TomTom + Mio’s Latest Breakthrough Product
MIO, based out of Vancouver, Canada, is a global brand and pioneer in fitness health and fitness technology, developing innovative, easy-to-use products that make heart rate training accessible for all athletes.
Press Release from Mio

“By enabling brands like TomTom to use our electro-optical cell detection technology, Mio is expanding the availability of heart rate training to consumers,” said Liz Dickinson, CEO of Mio Global. “The more companies promote the benefits of heart rate training, the more consumers will be driven to find the easiest way to measure heart rate and utilize this data to reach higher performance levels.”

Mio Global’s technology has emerged as the industry standard for high performance wrist-worn heart rate monitors. Through contractual relationships with Adidas and TomTom, Mio is bringing the benefits of heart rate training to the forefront by making accurate heart rate monitoring accessible to all.

Mio’s continuous heart rate technology is at the core of all Mio products: the award-winning Mio ALPHA heart rate monitor sport watch, as well as the new Mio LINK, an affordable heart rate band recently unveiled in early 2014. It’s also featured in the Adidas miCoach SMART RUN watch. By utilizing Mio’s proprietary technology, TomTom will add heart rate data to the many valuable performance statistics it shares with users as they work to achieve their fitness goals.

“Once again, TomTom is making innovative technology accessible to everyone,” says Corinne Vigreux, managing director, TomTom Consumer. “We know that heart rate monitoring is the single most accurate way to understand how the body is responding to exercise. Now, with the launch of the Runner Cardio, all runners can easily use heart rate training to improve their performance.”

Using two green LEDs and an electro-optical cell, Mio’s Continuous Technology measures every beat of the heart in real-time. The technology is integrated into the back plate of the watch so LEDs shine light into the skin, enabling the electro-optical cell to detect the pulsing volume of blood flow. In the past, athletes have turned to chest straps to track heart rate—but now wrist-worn technology can track the body’s response to exertion with real-time heart rate measurement, leading to more efficient training and accurate progress tracking. 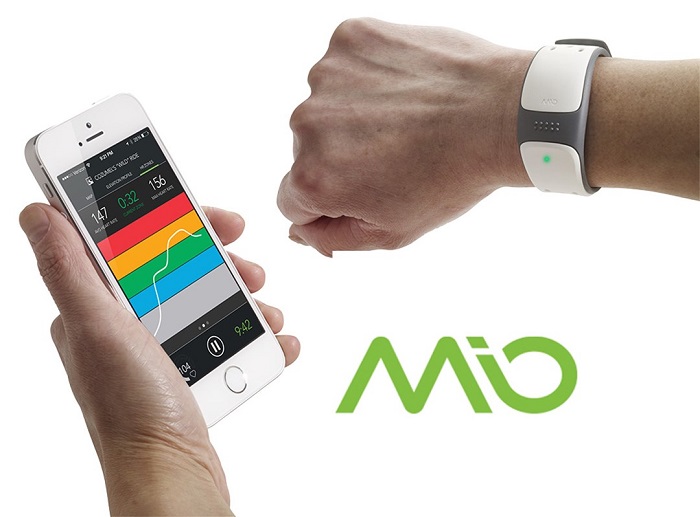 Mio LINK gives runners and cyclists all of the benefits of heart training without the need for an uncomfortable chest strap. Available at the incredible price of only $99 USD, Mio LINK with Bluetooth® Smart (4.0) and ANT+ transmits heart rate data to popular fitness apps, select GPS watches, cycle computers and other sport devices. Mio LINK features colored LEDs that signal the athlete’s heart rate zones as he or she is wearing it during a workout.

Mio Continuous Technology is featured in both the new Mio LINK, as well as the award-winning Mio ALPHA. This patented technology reads EKG-accurate heart rate data accurately at any speed. LEDs are integrated into the back plate of the wristband or watch, shining light into the skin, which then enables the electro-optical cell to detect the pulsing volume of blood flow measuring the heart rate in real time. Sophisticated algorithms are applied to the pulse signal to accurately track the heart rate compensating for the disturbance of other signals generated by movement.

About MIO
Mio, a recognized pioneer in health and fitness technology, is the maker of the Mio ALPHA and Mio LINK, the world’s first sport watch and sport band to provide continuous, accurate heart rate monitoring at performance levels—without a chest strap. Both devices connect to Mio’s fitness app Mio GO and other fitness apps, creating an easy way for athletes to track and record their fitness progress. Founded in 1999 by Liz Dickinson, Mio is a brand of Physical Enterprises Inc (Mio Global). Mio’s team of world-class scientists, engineers and professionals strive to help athletes reach their goals by innovating high-precision, easy-to-use technologies from the company headquarters in Vancouver, Canada.  For more information, visit www.mioglobal.com.

Bluetooth® word mark and logos are registered trademarks owned by Bluetooth SIG Inc. and any use of such marks by Physical Enterprises Inc. or MIO is under license.