Michael Akira West is the Owner and Creative Director of 686 Technical Apparel. The following are some of his experiences inside and out of the industry across the globe. *Add Comments at Bottom of Page!

Although one’s personal style will evolve and adapt over a period of time, the true essence of style is something that should come naturally.

I love it when style is timeless.

When it comes to products, there’s a few out there that I automatically gravitate towards.

The Lincoln Automobile Company is one example of an iconic company that (in my mind) was the dominate force in the auto world, back in the day.

I can’t speak too much of what they’re doing today, but when it comes to yesteryear, Lincoln ruled it.

I’m about to explode.

What’s behind the Black curtain?

Goodies for my Gadgets.

Not all those who wander, are lost.

The mission of the 686 RECLAIM PROJECT is to change the way you think about "throw-away" items and realize that these discarded materials can have another life.

Reclaim is our social initiative to minimize our carbon footprint by utilizing minimal process of technical garment mfg.

The RECLAIM Project: The Process from 686 Technical Apparel on Vimeo.

The halo effect of Reclaim is that it fosters new ideas and creative cultures. All of which 686 is about.

Next week, we’re embarking on our annual SIA and ISPO tradeshows in Denver and Munich.

We’re putting on a Reclaim design contest which involves three up and coming amateur designers.

Check out some of the entries and see how it all starts.

Blair is one of the chosen designers for SIA. Good stuff.

Flavors of the world.

There’s a huge difference of a designer who can sketch and illustrate vs. actually constructing a garment.

The ones that get invited to the Reclaim design contest must be capable of all above.

The devil's in the details.

On the other hand...

The idea to do things with talented people is to create something that’s much bigger and better than doing it alone, ie: 1 x 1 = 10

My friend, Jasper from Hawaii, is a prime example of what this means.

Pow Wow is his vision and over the past 3 years, has gathered a tremendous amount of energy.

Check what Pow Wow is about: POW WOW IS A GATHERING OF CONTEMPORARY ARTISTS THAT ENGAGES WITH THE BROADER COMMUNITY IN THE PROCESS AND CREATION OF ART.

“The beauty of art is most commonly enjoyed during its final stage. All the blood, sweat and tears happen behind closed doors. However, that is where the real grandeur lies. The process. Imagine for a moment a gathering of internationally renowned artists in one place. A place that will allow them to do what they do best: be creative. We give them the tools, the space and the freedom to paint for one week. We make that process open to the public, allowing them full engagement and interaction between the artists and their audience. They witness the creativity in its entirety and become an essential part of the artists’ process. It’s about the breaking down of those closed doors and making art accessible. Now take a step further and imagine transforming a whole neighborhood with art within a week. Seeing creativity happen all around you from beginning to end and bringing people together through the act of putting paint on surface. A POW WOW.”

Nearly 10 years ago, Dragon x 686 got together and produced one of the very first collaborative projects that this industry has ever seen. On the eve of our double decade, we felt it was a great time to up the ante once again.

With the contribution of Dragon's Director of Product, Mike Tobia and founder and CEO, Will Howard, we used their revolutionary APX frameless Infinity Lens goggle as inspiration and designed a collection of jackets that speaks the same language of modern and minimalist design.

Did I mention we made a few Limited Edition Goggles. Get em NOW. 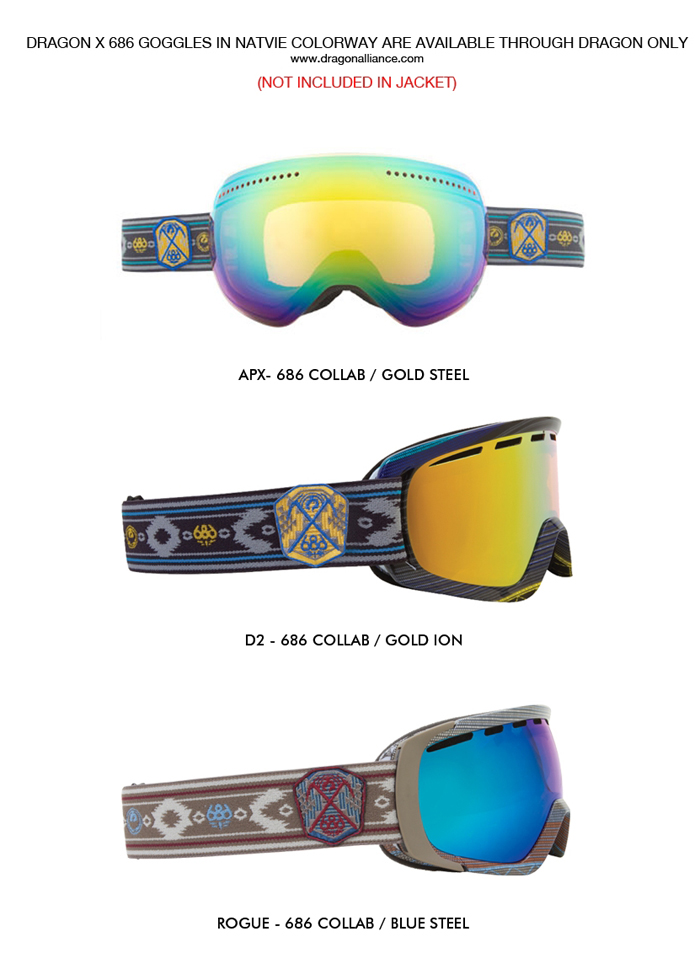 Doing cool things with friends can be a good thing.

Some of best ideas start this innocent way and end up being staple brands. My friend, KB is the lead designer for Undefeated.

One of his side projects is with his good buddy, Michael Sherman and Dr. Romanelli, called USSKB.

January is tradeshow season so I’m all over place in regards of traveling.

Part of the team went to Surf Expo in Florida; the other part went to Bright Show in Berlin.

I’m staying in the same time zone and taking a quick trip to Vancouver, Canada for the Know Show.

Instead of boring you with meetings and random stuff at the show, the highlight of my trip were two things.

The first being this.

Yes, it's still snowing somewhere in the world. Max from Endeavor feeling the same as me.

The other highlight of my quickie to BC has to do with this place in Gas Town.

My friend Dan is Canadian, via LA and he recently opened Railtown Café.

Come inside the top secret Kitchen.

Dan is intensively working with his team to bring home the prestigious title. Lots of confidential stuff brewing in the kitchen.

Chef Alex knows what’s up. You’re going to have to wait until next month to see if team Canada comes out on top.

Let’s check out what we have here.

My feet thank you Stance.

I’m not finished yet.

If you live in Los Angeles and been to Dodger Stadium, you know there’s something very special about the stadium in Chavez Ravine.

Only a few miles from the heart of DTLA, Chavez Ravine brings a long history about the constant changes in the city of Angels and somehow represents the opportunity of the American way.

The story of New Balance resonates from New England, where they were born and raised over the past 107 years.

California culture is synonymous with skateboarding and in my opinion; Dodger Stadium is an iconic landmark that represents this transition from the old to the new.

This is the reason why I wanted to bring some of my friends to Dodger Stadium and introduce New Balance Numeric.

Come inside and see some history.

If you’re curious to understand more, check out the story that Lee wrote for boardistan HERE or the one from Bobby at the Hundreds HERE.

The good thing about Vegas is that it's only 2 hours from my doorstep to crazytown.

The bad thing is that it's only 2 hours from my doorstep to crazytown.

I had some meetings at the semiannual Consumer Electronics show (CES) in Vegas.

Oh boy, it's going to be a long few hours here.

If you’ve never been to CES, imagine a thousand Best Buys connected to each other, the day before Christmas.

The rad thing is that there’s so much cool stuff to check out such as 3D everything.

Who needs stylists when you can have Big Brother help you out.

Check out the kitchen from the future. This fridge will do everything except make the food for you.

I spoke too soon.

Anyone that’s connected to the electronic world is here, including the auto industry. Check this whip out.

Audi brought their clean minimal vibe to the show.

The entire booth was bright as light.

I ran into some familiar faces from Transworld, Hypebeast, Hex, Zumiez, Beacon, and Lifeproof.

I also made some new friends including illustrator/designer/fashionista/bun master extraordinaire, Sophia Chang.

On my way out, I stumbled upon the good folks at Skullcandy.

Their booth was located outside in a mega tent where they're showcasing all their upcoming projects.

Aaron is part of the executive team and in charge of their expansion overseas.

I didn’t know Aaron way back in his Real World days, but soon after, we’ve had some good times during his tenure at Oakley and Dragon.

Aaron shows me some of the new things brewing in the kitchen.

Skullcandy was the first to market headphones to the market.

They’ve also committed to be leaders in the space with being one of only 2 other global electronic brands to design, develop and produce their own DRIVERS.

Warning--The end result is something you’ve never heard before.

I’m a dude that enjoys the “process” of making things.

Matix has been around for close to 15 years and has stuck to their US manufacturing standards of always making part of the collection in here.

Welcome to the Matix Workshop.

The best denim made here.

Labeled for your pleasure.

Stamped for your pleasure.

Once January hits, I tell my lady that I’m out of town until sometime in March.

In between the winter season, sales tours, tradeshows and everything else in between, I feel like I’m going on tour with a band.

A different city or country each week may seem exciting, but after doing this for a long time, it starts to hurt.

My body doesn’t seem to recover as much as it used to.

The flip side is that it's always fun and great to see old friends and make new ones.

This time around, I’m in Keystone, Colorado for the world famous Zumiez 100k - Hello Keystone.

First chair up with Danny Kass, our new director of marketing, Brent and Austin Smith.

It doesn’t take long to remember that LA is always close by - Seventh Letter represent.

Good times on the hill today, I better get ready for the craziness happening tonight.

The 100k is an annual event dedicated to Zumiez employees who sell over $100k worth of product per year.

The invite only event is truly the biggest tradeshow in the industry because every pro athlete, industry exec, musician, personality is here (along with 1,200 kids who sold over $100k).

It’s themed each year-I wonder what it is this year?

Here are some more hints.

These two are from Bellingham, Washington are 686 fans and asked for my autograph.

Are you sure you have the right dude? I sit at my desk and design things.

The important dudes are on stage...

OC meets LA (Wooly from Volcom and Bobby/Ben from the Hundreds).

Sell lots of product at the store, get lots of stuff, good night.

Guess where I am?

It’s cowboy country in the mountains

For the past 5 years, I’ve been heading to Steamboat, Colorado about this time to get my shred on with some old friends from around the way.

Marty and Tammy have been graciously hosting a few invited guests from the industry and the entire Zumiez buying team for the past decade.

After some fun times sledding at Buff Pass, Stagecoach and the mountain, the highlight of the trip was playing dice.

Jimbob from Zumiez and Gerfried from Blue Tomato are trying to figure out who’s doubling down.

After many hours of playing, guess who rolls home with this stack? OG freestyle shred legend, Dale Rehberg.

Dale-you hold onto that stack, while I take your Noboard outside and try and do something stupid.

Everything starts with an idea.

The difference between something you think about vs something that comes to life can be worlds apart.

I’ve always preached to the choir that it comes down to PEOPLE and TIMING.

With New Balance Numeric it definitely involved both of these important points.

Product won’t be available until July, but we’ve recently gathered a curated group of heads of retailers to the tastemakers at the world famous Dodger Stadium in Chavez Ravine this past week.

Check out what went down via our friends at Hypebeast.

The heads at Skateboarder Mag felt the same when they launched their recent Holiday lookbook with the help of some Girls, who in fact like Boys featuring the Matix Hemsworth Jacket.

The freedom of speech is a powerful thing.

However the freedom to surf is something completely different...