Michael Akira West is a partner and creative director of 686 Technical Apparel, MATIX Clothing and NRI Distribution. The following are some of his experiences across the globe. *Add Comments at Bottom of Page!

The Matix fam took a day trip up North to Leo Carrillo and ended finding some good stuff. Can someone tell Trevor we’re here

JJ is eager and ready to go

I think Turk is already trying to find the good stuff

Chase is waxed up

From the ground UP

In order to predict the future, you must understand the past

Did you know that Flexfit invented the trucker hat in 1978?

Wanna see how its all done? Jeff Hamada x Boooooom x Flexfit shows us how its done

Booooooom x Flexfit: "All In A Day's Work" from Flexfit on Vimeo.

The man with the plan. Big ups to Andy and BSCMP

New York native Jon Contino is widely known for his unique style which combines old & new world aesthetics into a modern, minimalist style imitated all over the world. His work reveals the influences of historical New York, contemporary street art, and the lost art of hand lettering. Through these images, his story is told as a designer and a consultant for brands ranging from the smallest boutique start-ups to the largest international corporations.

When designing, Jon is proud to say that he got to "push the boundaries a little bit and get rowdy". With the collection, Jon brings some new life to an old subject...America. He rediscovers the attitude of our forefathers without shame or regret. All said, we are proud to present you with the Matix x Contino collection

This week, 686 is taking over the Transworld website. From Forest Bailey’s Cosmic  Collection to Cam’s obsession with the Moniker, check the madness here 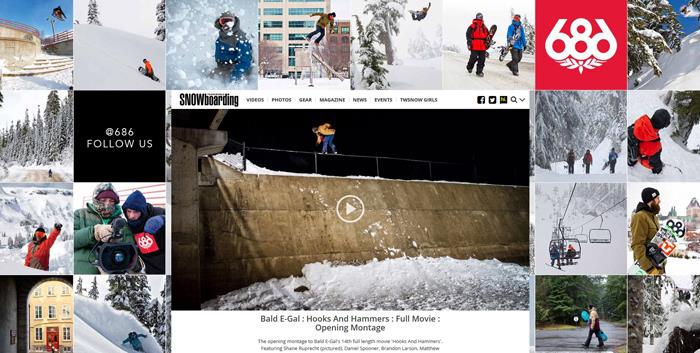 According to Vanity Fair world renowned design icon, Marc Newson and Apple design chief, Jony Ive  have teamed up at Apple.   “Marc is without question one of the most influential designers of this generation. He is extraordinarily talented. We are particularly excited to formalize our collaboration as we enjoy working together so much and have found our partnership so effective.”

From the dirty streets of downtown, to the skateparks of suburban neighborhoods and straight into the salty ocean-Matix Denim is built with durability and quality to with stand the day to day use of what you are going to put your jeans through. JJ Wessels puts my favorite pant, the Gripper Indigold to the test after forgetting his favorite pair of board shorts at home and paddles out for a session at Old Mans.

Check out the Gripper Indigold, guaranteed for life

And check out JJ

It may be in the mid 80’s here in LA, but winter is always on our minds here at 686 Our friends at Snowboarder dropped latest edit called Reel Talk, to get everyone ready for the season. The 686 am squad (Riley, Austin, John, Tarbell) was full in effect. Here’s a little teaser of what it takes to get the right shot

Hand made by precision making instruments

You know when you have a meeting on the calendar and it keeps getting pushed back and then never happens? I’m a victim to this, but I’m proud to say that I’ve broken the cycle to this viscous disease! I took a quick 35 minute ride to the Beverly Hills to have lunch with Rickey from Machine Shop.

If you didn’t know Machine Shop is the creative arm of Linkin Park.  From strategic partnerships to music videos to merchandising to what the stage set up looks like, it starts with the guys in LP and Machine Shop

LP is currently on their Carnivores world tour, along with 30 Seconds to Mars and AFI. Rickey and the crew at Machine Shop took back the reigns of merchandising and approached the direction from a brand point of view

The artwork is on point. The ever talented James Jean for LP. See you guys in a few weeks at the bowl