The start of December means the 2015 season of AMSOIL Arenacross, featuring Ricky Carmichael's Road to Supercross, is just a few weeks away. While the stars of the championship gear up for their season-long assault on the title, the talented field of Road to Supercross riders are ready to make a name for themselves in the professional ranks.

Hailing from the Pacific Northwest, Washington native Darian Sanayei is setting a new path to stardom as he progresses through Ricky Carmichael's Road to Supercross. Last season Sanayei attempted to complete the Road to Supercross, but admittedly underestimated the challenge of AMSOIL Arenacross. Sanayei bounced back at Las Vegas' Monster Energy Cup in October, where he posted a pair of podium finishes in the Amateur All-Star class to finish second overall behind Road to Supercross graduate Aaron Plessinger. With a new outlook and better preparation, Sanayei will use the experience to his advantage in 2015.

"It was definitely a different show coming to arenacross. I thought it was going to be quite a bit easier than it was [last year]," said Sanayei. "You think of supercross as huge and arenacross as small, but it's not like that. I went there and thought maybe I shouldn't have taken it so lightly. I should have come in a little bit more prepared."

Sanayei has been training and riding at Club MX alongside a slew of veterans and rising stars of the sport. Although he struggled in 2014, he is no stranger to being a front-runner. Just last week the Kawasaki rider claimed two AMA Major titles at the Winter Olympics in Gainesville, Florida and at the age of 18, his talent level is hitting its stride at the most critical point of his racing career. 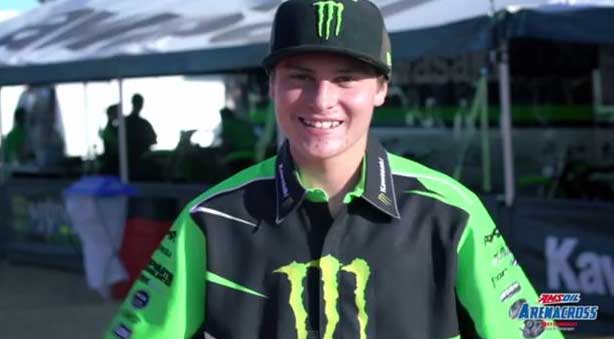