On May 15th, The NPD Group and SIA released retail results showing the snow sports market up 3% to $4.6 billion compared to the 2013/2014 season. Total market projections are based on retail data collected by The NPD Group from the Point of Sale systems of more than 1,200 snow sports retailers.

Snow sports retail sales made between August 1st, 2014 and March 31st, 2015 were up 3% to $4.6 billion in total sales, $110 million more than the market had brought in by the end of last season.Outerwear sales were up 8% to $1.6 billion, equipment and equipment accessories sales were down 2% to $1.6 billion, and selected apparel accessories sales including total headwear, handwear and base layer sales increased 5% to $589 million through March.

Sales for the month of March 2015 were down 5% overall compared to sales in the month of March 2014. The impacts of heavy snow and ice in the Northeast, drought in the Sierras, warmer than average temperatures in the Pacific Northwest and sporadic conditions in the Rocky Mountains were felt in the sales results and skier rider visit patterns throughout the season. In fact, according to NSAA, resort visits in the Pacific Northwest were down more than 30% this season, and resort visits were down nationwide 6% by the end of the season.

“Visitation nationally was variable by month, although weakest later in the season. On an overall national basis, visits were up 7 percent in October/November, down 4 percent in December, up 12 percent in January, down 10 percent in February, down 13 percent in March, and down 28 percent in April. Patterns were variable by region, although all regions enjoyed increases in January, and all regions experienced losses in February, March (except for a slight uptick in the Northeast), and April (except for gains in the Southeast).” Source: 2015 NSAA Kottke Preliminary Study.

Sales of women’s specific products were up 4% in dollars sold to $1.4 billion (30% of total sales) through February this season. In addition, women make 80% of all household spend decisions and influence 95% of all spending decisions in households.

In the February dataset, NPD adjusted the methodology used to determine total sales for the Internet/Online distribution channel from August ’14 through January ’15. The increased accuracy of the new projections better reflects the raw data trend coming in from retailers on the NPD retail panel who are engaged in online sales for this time period.

The changes have increased the Snow Internet channel size by $90MM and shifted the season-to-date trend by 10% for this time period. When viewing the data with all channels combined, the overall market trend in dollars sold increased by 2% versus what was previously reported August ’14 to January ’15. 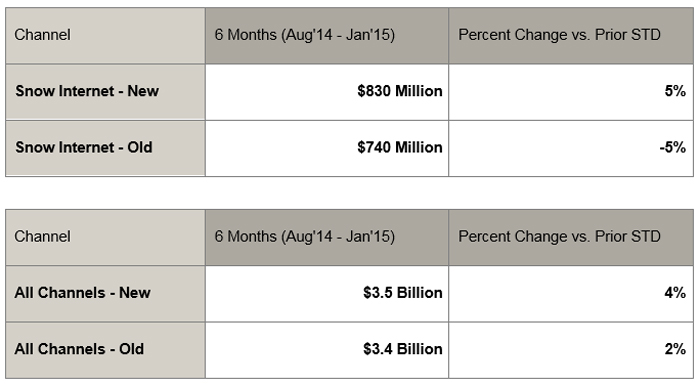 In addition to this re-projection of Snow Internet channel data, there have been substantial modifications to the retail data since last season due to the October 2013 acquisition of The Leisure Trends group by The NPD Group. The transition from Leisure Trends data to NPD data represents significant shifts in the projection model and in the way users access their data. This season, subscribers to the snow sports retail data will use the NPD proprietary interface – DecisionKey® to access the retail data. The RetailTRAK™ interface portal formerly used by Leisure Trends is no longer in service. The new NPD DecisionKey® interface provides snow sports data subscribers a broader view of the snow sports market data including apparel, accessories and equipment. Additionally, snow sports data subscribers will have more tools to build views of their data, and more options for saving and downloading their reports. If you have any questions or concerns about this retail data please contact Kelly Davis, SIA Research Director at 703-506-4224, or contact your SIA Sales & Marketing Manager.

Here are your SIA contacts for requests and questions about Research:

SIA releases the top line results for snow sports retail seven times each season from November to May covering results of retail sales made between August 1 and March 31 each season. Topline/category retail sales data for the snow sports market is available as a member benefit to all SIA members. In addition, you gain free access to topline data for the Running, Outdoor and Paddle Sports when you register. The topline data is accessible on a 24/7/365 basis on The NPD Group’s proprietary user interface, the DecisionKey® data portal.