“To perform with my Nitro Circus friends again and ride on the world’s biggest action sports stage was incredible,” said Cook. “The energy and support from the fans was unbelievable.” 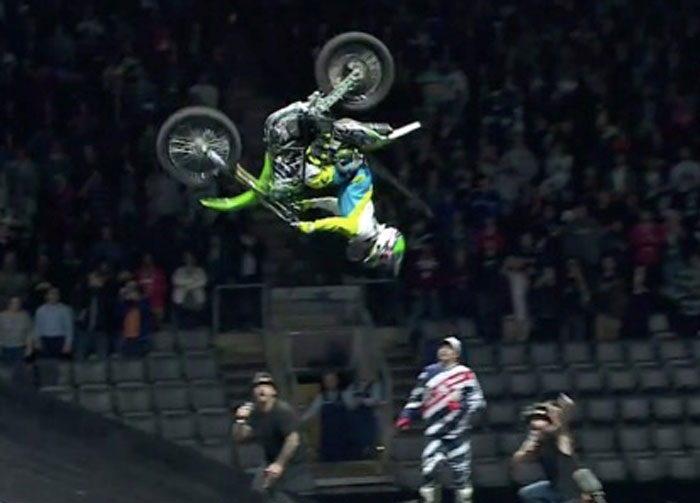 “Bruce Cook is the man. The strength and courage he’s shown is huge,” said Nitro Circus ringleader and action sports icon Travis Pastrana. “In Nitro Circus, we are all about pushing boundaries and overcoming obstacles in order to reach our goals, and Bruce lives that day in and day out.”

“This is now officially the biggest moment in Nitro Circus Live’s history,” said Michael Porra, Nitro Circus CEO and Creative Director. “Bruce Cook is part of the Nitro family and to see him back on the bike doing what he loves is tremendous.”

Cook had visited Travis Pastrana’s “Pastranaland” complex in Maryland, USA months ago to train with the extreme sports legend while he was on a break during Nitro Circus Live’s marathon world tour. Cook’s Toronto jump was his very first attempt at landing on a proper ramp. In order to make this momentous attempt, Cook’s bike was modified to secure and support his legs. Once seated on the bike, Cook could not bail out during the jump if something went wrong.  His commitment was absolute.

Cook’s world’s first is the crowning achievement in a huge comeback over adversity. Just over a year and half ago, Cook was living his dream. Already an acclaimed FMX athlete, the Kelowna, Canada native had been touring the world, performing for thousands of fans at each tour stop. He made his X Games debut in 2012 and was riding with one of his longtime idols, Travis Pastrana. Cook was also going to try to rock the action sports world by attempting the world’s first double frontflip. In an instant however, everything changed.  Cook under rotated on the double frontflip landing and crashed hard, breaking his T-11 vertebrae and damaging his spinal cord resulting in paralysis from the waist down. Cook now faced the biggest challenge of his life.

The highly motivated Cook tackled his injuries with the same focus and resolve that fueled his riding. He remained as driven and passionate about action sports - and about life - as ever. In fact, just ten months after his accident, Cook was back on a dirt bike and popping wheelies on his first ride. Cook continues to motivate and inspire people around the world with his story.  Having come full circle making action sports history in front of his home country, Cook has defied the odds once again and redefined what is possible.