The largest rear light for cyclists hit the market Thursday the 19th on the crowd fund platform, Indiegogo. The flexible, 11"x4" light panel is stitched into a 29 liter waterproof backpack, FLUX, the latest product by Torch Apparel, a specialty brand focused on stylish road safety products for cyclist and motorcyclists. 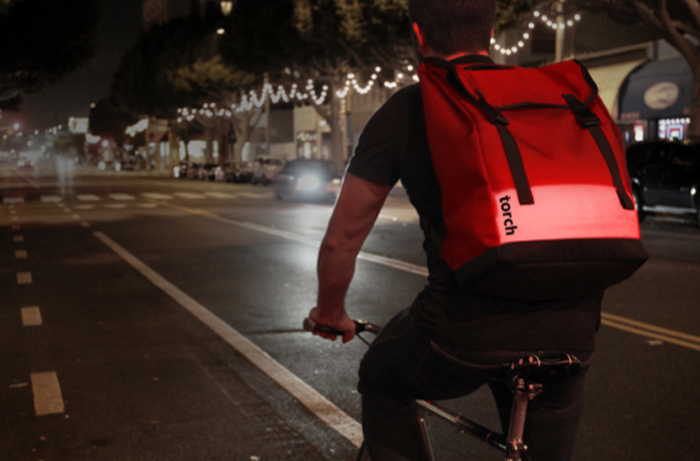 The goal of the Indiegogo campaign, Torch's third crowd fund campaign, is to bring awareness to the new backpack while the added funds, set at $45,000, will be used to evolve the concept of active and stylish street safety gear. Torch Apparel is currently working on a line of outerwear with the same-patented technology as FLUX. Nathan Wills, lead designer, CEO and Founder of Torch Apparel concluded, "small centrally mounted lights aren't visible to vehicle handlers and most people just won't wear florescent vests. The solution is styling large active safety lights on the rider, not the bike."

Wills created Torch Apparel after having been struck by a car on three different occasions, the last while riding home from work from his office in Los Angeles, Ca. With a personal mission to create a safer solution, Wills began with his first product, TORCH's award winning T1 helmet with integrated lights, bringing the idea to fruition using the platform, Kickstarter.

After two successful campaigns, and selling out of merchandise twice in 2014, he has partnered with Crowd-Fund Incubator, Blak Box Group, to manage the campaign as Torch Apparel continues to grow. FLUX backpack is available for 25% off MSRP as a perk on the FLUX Indiegogo page; the campaign is set to continue until December 19th.