Anderson, who entered the event with 10 X Games medals overall under her belt, came into the contest with perhaps one last window of perfect weather, which gave the riders stellar conditions on an immaculate slopestyle course.  All that said, Anderson admits that for whatever reason she was not feeling like herself this morning. 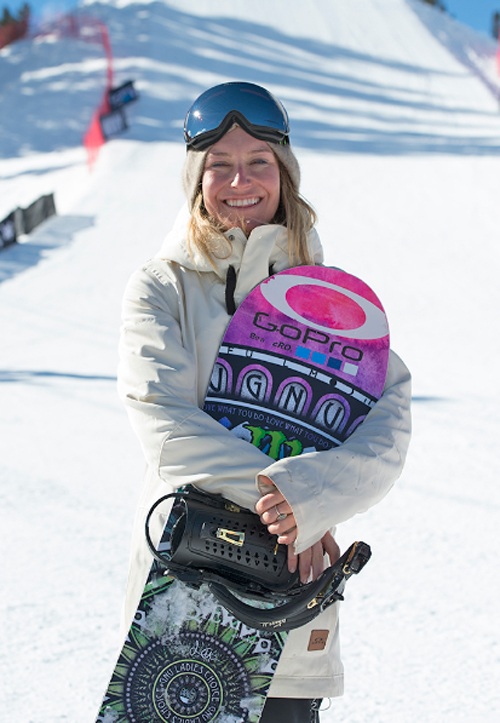 “I was actually really nervous,” said Anderson. “Usually I’m really good at being chill, but my nerves were out of control today.”

Coming off a nasty collarbone break in December, Anderson sat well behind podium contention going into her third and final run in which the best score counts. In this unfamiliar position, the 25-year-old from South Lake Tahoe stepped up her scene and put down a run that the panel of judges simply could not deny.

“After things didn’t work on with what I wanted to do the first two runs I decided to just change the game up entirely at the end,” said Anderson.

And mix it up she did. After a smooth and stable performance on the rail section including the most stylish back lip in the field, Anderson then crouched in to fighting position and took the final run hostage performing a technical assault on the next three kickers. Approaching the first jump switch, Anderson landed a stylish frontside 720 before a massive backside rodeo, landing well down the transition in perfect fashion. With everything to gain and nothing to loose, she then raced into the final jump switch with a flawless cab 720 Indy grab stomped to perfection before riding away with her signature smile. With a score of 88.00 it was enough to earn the reigning Olympic slopestyle champion a second place finish.

This was Anderson’s 11th X Games, an event in which she has without fail landed on the podium and has won five gold medals out of the 11.

In the coming weeks Anderson will make history by competing in two Big Air competitions, a first for women’s snowboarding. The Polartec Big Air at Fenway Park in Boston takes place on February 11th and 12th with X Games Norway slated for the 24th through the 28th.

“These events and the addition of Big Air to the Olympics are really cool to see. I think it’s going to shed some more light on what we are capable of,” said Anderson.

For more visit http://www.monsterenergy.com and Monster Energy Facebook to score all the exclusive updates from X Games Aspen 2016 including photos, videos, and contest results as they happen. Follow us on Instagram and Twitter and search #UnleashedAtX for exclusive behind-the-scenes looks in Aspen.