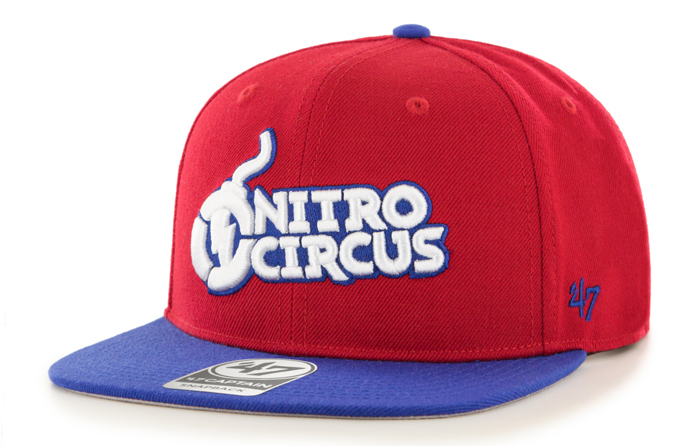 ’47, a privately-held, premium sports lifestyle brand, today announced a new licensing agreement with Nitro Circus, a global leader in action sports and entertainment, effective immediately. The partnership establishes ’47 as the exclusive headwear and apparel partner of all Nitro Circus sponsored athletes and gives the brand rights to distribute and sell branded headwear and apparel at sporting goods and specialty retail globally. The two-year agreement solidifies ’47’s position in the action sports and lifestyle markets and increases brand exposure with a new licensing partnership added to the band’s robust portfolio.

“Nitro Circus is an authentic, action sports collective that has grown to have immense international reach,” said ‘47 co-owner Steven D’Angleo. “’47 has a long history of thriving at the intersection of sport and culture. Our partnership with Nitro Circus, one of the world’s largest sports entertainment enterprises, is an exciting new chapter of our storied brand position.”

“We are thrilled to team up with ’47 on a collection that is 100 percent in line with Nitro’s brand essence,” said Peter Maule, global head of licensing for Nitro Circus. “This fully integrated agreement is the next step in our licensing strategy as we continue to seek new and innovative ways to partner with top tier organizations. Both parties are equally vested and totally aligned for mutual success.”

Through this agreement, ’47 is granted various image, video and social media rights to feature Nitro Circus athletes. ’47 expects to launch product at retail in spring of 2017. ’47’s brand’s DNA is deeply rooted in the expression of individuality with the platform of “LET YOUR YOU OUT,” and the new partnership will expand on that directive internationally with Nitro Circus product.

About ‘47
’47 is a privately held sports lifestyle brand founded in Boston, MA, by twin brothers, Arthur and Henry D’Angelo in 1947. The D’Angelos were entrepreneurial pioneers who were quick to see the future of sports licensing by selling pennants and other sports memorabilia on the streets around Fenway Park. Through a combination of hard work, sound instincts and incredible passion, the brothers were able to grow their business from a single street cart to a premier sports lifestyle brand that uniquely melds sport and style. Previously known as Twins Enterprises, ’47 is currently managed by Arthur’s four sons, Bobby, David, Mark, and Steven.’47 is a proud partner of Major League Baseball, the National Football League, the National Hockey League, the National Basketball Association and over 900 collegiate programs and owner of Old Time Sports. ’47 employs over 250 corporate and retail associates around the world and is headquartered in Boston and Westwood, MA. For more information, please visit www.47brand.com.

About Nitro Circus
Named #22 on Forbes magazine’s 2015 list of America’s Most Promising Companies, Nitro Circus continues to position itself as the world’s leading youth action sports & entertainment brand. From humble beginnings in 2003 – with Jeremy Rawle, Gregg Godfrey and extreme sports superstar Travis Pastrana producing DVDs from a Utah garage -- to a smash TV series which has aired in over 60 countries, Nitro Circus has exploded to global popularity. In 2012, Nitro Circus: The Movie, featuring cast members from the hit television series, was released in cinemas worldwide. In 2015, Nitro Circus announced a partnership with NBC Sports Ventures. This multi-year strategic alliance will feature TV specials and series programming airing nationally in the U.S. on NBC and NBCSN as well as streamed on NBC Sports Live Extra.

The TV show was transformed by current CEO and action sports industry guru Michael Porra into a must-see live event in 2010, creating the global touring phenomenon that is Nitro Circus Live. Since its inaugural Australian trek six years ago, the show has travelled the globe, obliterating box office records and cultivating a legion of diehard fans. Nitro Circus has now rolled across five continents, blown away over two million fans and sold-out shows in the United States, Canada, Europe, Australia, New Zealand, China, Japan, the Middle East and South Africa.  After close to 100 shows globally in 2015 and a packed 2016 touring schedule visiting even more cities coming up, Nitro Circus is clearly the world’s most successful action sports touring brand.