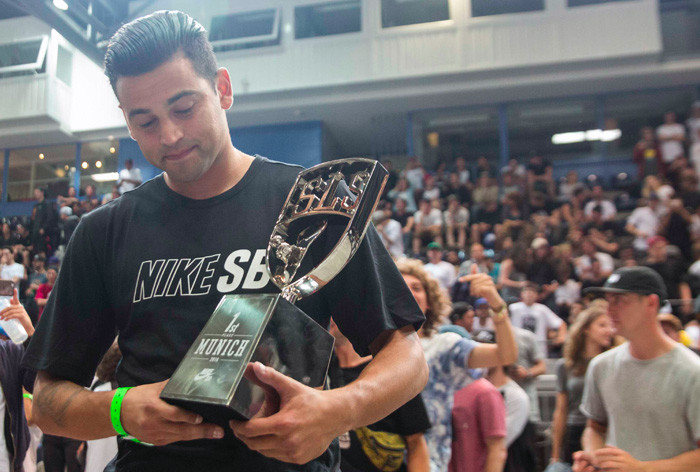 Street League Skateboarding (SLS) descended upon Munich this weekend with the world’s most accomplished skateboarders for the 2016 SLS Nike SB World Tour televised live on FS1. The stakes were high as always, with each Pro competing for ongoing Championship Points that accumulate for potential inclusion in the biggest annual competition in street skateboarding: the SLS Nike SB Super Crown World Championship, this year taking place in Los Angeles, CA. Starting the season with a strong victory was Nike SB Pro Paul Rodriguez, earning his first SLS victory since 2013, his fifteenth 9 Club trick, $80,000 and the prized Golden Ticket to the SLS Nike SB Super Crown World Championship. Second and third places deservedly went to Luan Oliveira and Nyjah Huston, each both favorites to make the Championship.

As a hotbed of skateboarding located almost in the center of continental Europe, Germany is the ideal country in which to host the best skateboarders in the world. For the first time this Season, the full roster was set to complete, including the newest 2016 SLS Pros who made the elite list through pervious Qualifier contests: Carlos Ribeiro, Micky Papa, Tommy Fynn and Tiago Lemos. This season also includes a shortlist of wildcards called the SLS Picks, including Kyle Walker, Kevin Bradley, Miles Silvas, and Chris Joslin. With such a diverse mix of skill levels and experience, this season was set to be one of the most intense in SLS history, as proven by Munich of the 2016 SLS Nike SB World Tour. On such a tight and crowded course, technicality, speedy footwork and creativity were paramount to keep up.

Kicking off the event, all of the competitors brought their best for the Prelim that cut the roster to just eight continuing to the Final. Some of the more unique Qualifier highlights included:

•       SLS veteran and previous SLS Nike SB Super Crown World Champion, Chris Cole, with his Nollie 270 Bluntslide off the hip onto the flat bar (6.5).
•       Coming in Fakie, Trevor Colden’s Halfcab Crooked Grind Revert down the hubba (6.8).
•       Micky Papa’s solid Nollie Heelflip Crooked Grind down the hubba (7.1).
•       Sean Malto, making it look easy with a Nollie Frontside Crooked Grind down the handrail (7.6).
•       Newcomer last season and crowd entertainer, Evan Smith, put down a run that made the crowd stand on their feet ending with the first-ever Handstand in an SLS completion (outside of his run time) (7.7).
•       Cody McEntire’s confident and perfectly executed Nollie Bigflip down the stairs (7.8).
•       Miles Silvas with his Switch Kickflip 50-50 down the hubba (8.0).
•       Nyjah Huston’s Backside 180 Nosegrind Revert (8.3), followed by a Backside Kickflip Nosegrind down the handrail riding out straight to notch up yet another 9 Club trick (9.0).

•       Shane O’Neill’s perfect opening during the Run Section, dropping in off the quarterpipe to gain speed for a Switch Bigspin up the euro gap, into a Crooked Grind down the hubba with a Nollie Flip out, a 360 Flip up the euro gap and into a quick Backside Disaster on the quarterpipe before a Nollie Flip back down the euro gap, a Bigspin Boardslide to Fakie down the handrail, a Nollie Heelflip on the pyramid, a Bigflip up the euro gap and finishing with a perfect Switch Kickflip down the stairs (8.9).
•       Showing why he’s the most decorated skateboarder in the history of SLS, Nike SB’s Nyjah Huston put in an action-packed Finals Run: a 360 Flip down the euro gap and straight into a Frontside Feeble Grind off the bank onto the long curved flat bar, a Switch Frontside Flip off the hip and over the flat bar to the platform, a Backside Bigspin down the euro gap, a solid Kickflip Backside Lipslide off the hip to the flat bar, a Backside Tailslide on the smaller flatbar and into the bank, a Backside Kickflip up the euro gap and finishing with a Crooked Grind along the flat bar for 8.1.
•       Although not shining his brightest during the Run Section, Nike SB Pro and SLS veteran Paul Rodriguez put it down with a Run that was almost entirely Switch: starting with a Switch Heelflip up the euro gap he rolled straight around into a Switch Front Bluntslide down the hubba, a Frontside Lipslide up the smaller flat bar to the platform, a Switch Backside Tailslide down the hubba, a Switch Backside Lipslide down the handrail before speeding into a Switch 360 Flip over the pyramid, before completing his run with a Nollie Frontside Heelflip over the hip for a score of 7.8.
•       Breaking out the heavy-hitting tricks that the crowd really comes to see, the Best Trick section allows each athlete five attempts to put high scores on the board. On his first attempt, Paul Rodriguez didn’t disappoint with his Crooked Grind down the rail with a solid Nollie Heelflip out to take another 9 Club placement for himself (9.2). He followed this with a Switch Backside Kickflip down the stairs (8.2) and a Switch Kickflip Backside Nosegrind down the hubba (8.7).
•       Performing fantastically through the Prelim, but unable to pull it together during the Final, newcomer Tiago Lemos – who won his way into the League at the SLS Nike SB Pro Open in Barcelona this year – showed why he’s worthy of his presence with a mid-Run Ollie 50-50 up the hubba, being more of a trick for a video part than a skateboarding competition. During the Best Trick section, he first landed an amazing Fakie Ollie Switch Crooked Grind down the handrail (8.5) and then a huge Nollie off the bump to the rail on the bank of the hubba with a stylish and perfectly landed Nosegrind (8.8).
•       Luan Oliveira scored 8.0 or above with four of his five Best Tricks: a Switch Frontside Kickflip over the handrail (8.0), a 360 Flip to Frontside Noseslide down the hubba (8.0), a massive Frontside Kickflip off the big bank and over the gap and fence right out of the street course (8.1), and a perfectly timed Hardflip out again (8.6) – an obstacle never before used during a SLS competition.
•       Already with a place at the SLS Nike SB Super Crown World Championship with wins at both the Tampa Pro and the Pro Open events, Shane O’Neill tried some amazingly technical Best Tricks for the fans, unfortunately without success except for his Bigspin Backside Tailslide down the hubba for a score of 8.0.
•       Tom Asta laid down two solid crowd pleasers: a high-speed Nollie Heelflip Frontside Noseslide down the hubba (8.2) and a Switch Frontside Heelflip over the handrail to the flat (8.2).
•       Nyjah Huston came out much stronger than is typical for his competition style with some big and risky attempts to keep the fans on their toes, coming up short but escaping unscathed. Keeping himself in the top three, he stomped a Backside Over-Noseblunt down the handrail (8.7), and a huge Backside Kickflip off the bank and right over the hubba to the flat (8.3). Following in suit, , Ryan Decenzo charged straight over the same hubba with a textbook Frontside Kickflip for a stronger score of 8.4.

Congratulations to the 2016 SLS Nike SB World Tour, Munich winner Paul Rodriguez, coming back from the bottom of the Final Leader Board to take victory. The SLS Nike SB World Tour continues back in the United States with a series of televised arena events. Starting in New York City neighbor Newark, NJ –– it then continues on to Los Angeles, CA for the street skateboarding competition that matters the most: the SLS Nike SB Super Crown World Championship, where the top most eight elite street skateboarders will compete for the title of Champ.

SLS offers options for fans across the world to tune in and watch skateboarding’s most prestigious competition series. International fans can watch each event webcasted live exclusively on StreetLeague.com. Fans in the United States can watch SLS on FS1 and customers of participating cable and satellite TV providers may access the live stream through the FOX Sports Go app for iOS, Android, Windows and Kindle devices, as well as on desktops through FOXSportsGo.com.