Focus Groups at The Shmooz Highlight Blazing Your Own Path, Networking and Effective Cover Letters and Resumes 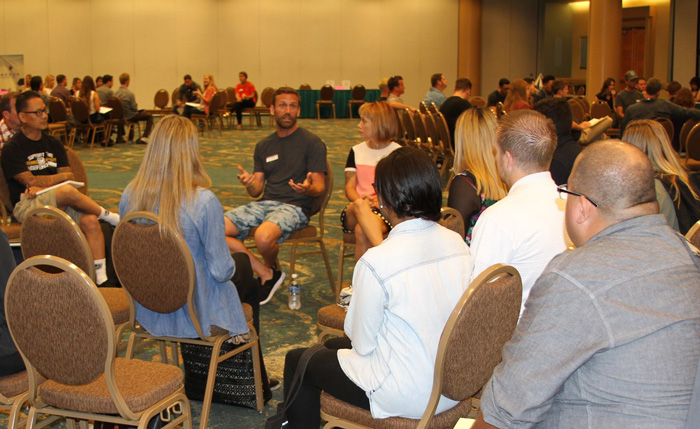 Pictured above - Chad Mihalick talking while Leslie Juvin-Acker listens and gets ready to add to the discussion.

I sat next to Chad in the Career Strategy group discussion. It was our first time facilitating a group together and I have to say, listening to Chad talk was like sitting in group therapy...

Chad Mihalick and the Malakye crew (Ashlee Stater, Kelly Quiller, Mark Thome) switched up the format at this year's Shmooz at Agenda in Long Beach this year. Instead of a panel discussion, there were three rotating discussion groups each based on a single topic. Dozens of unemployed and actively seeking listeners filed in and listened for anything new or different that could influence their career path. Anything they haven't heard or seen online before that could give them the paradigm switching advice they were so hungry for.

It takes a certain amount of humility to come to a Shmooz event. Attendees put themselves out there as professionally packaged as can be and, to a certain level, raw and vulnerable. All the while - in the face of uncertainty - putting their best face forward in hopes of landing an opportunity with one of the companies at the event. As some are confident in their job prospects, there hangs a subtle, yet perceivable veil of desperation, bitterness, and hope.

Chad Mihalick sees this. As founder of Malakye.com he understands how discouraging, hopeless, and confusing the job search (and selling ourselves) can be. He, as a leader, commiserates on this emotional conundrum we've all found ourselves in at times throughout our careers. While Chad doesn't tell the guests in the group how to overcome their emotional hurdles (I jump in and quip that this is what people pay me for), he does give some straightforward career advice that I believe is worth repeating on this week's Picks.

"There are 4 channels for finding your next job," he says. Job postings, recruiters, your network, are the first three. The last one is blazing your own path.

Chad tells the attendees that the job post applicants face the most amount of competition and the least amount of empathy. Either you match the profile or you don't. Don't take the rejection and lack of follow up personally. In the nature of this game, it's a statistical crap shoot. It's the least personal, but there is some small statistical evidence making this route worth taking.

Second, Chad says, are recruiters - meet as many as you can, have as many working for you as possible, and find the recruiters who specialize with specific companies and industries. Build relationships with these individuals and be open to them even while you have a job. For the specialized folk, recruiters are the way to go as they have access to people you'd otherwise have to pay to meet.

Third, is your network. "Activate it," Chad says. Let people know you're out there, what you want, and keep reaching out. "If you don't have a network then build one on the site (Malakye.com)," he instructs. This is where you sales skills come into play - convincing people to help you and building relationships as a friend and as a professional. There will be many doors that close in your face; keep knocking.

Fourth and, "Where there is nobody competing against you," according to Chad, "is your own path. Research who you want to work for, learn as much about them as possible. Get your hit list of your top companies and keep knocking until you get in."

I chime in and say, "In other words, become a stalker."

The joke breaks the tension. "It's true," Chad insists, "Learn as much as possible."

Chad encourages people to go after what they really want, to go places that nobody else dares to go, and to give themselves a break when things aren't so great. He speaks with time-worn experience.

In a genuine and heartfelt manner, Chad intimately gets what Malakye community members go through. And, while acknowledging their personal struggles, he reminds him what Malakye strives to do - connect people, to remind everyone who is looking for talent that, as the new slogan proclaims, We Are Here.

"Don't connect with just the recruiters here today," he says, "Connect with each other." A subtle reminder that we're not only in the market for a job, we're in search of new business partners, trusted colleagues, and - if we're lucky - friends.

After the Shmooz had ended I animated with my hands on my chest, "Wow Chad, that was some real heart to heart there in the group today."

He looked at me with a tilted smile and said with a breath, "It was like talking into a mirror."

Call me sentimental, but this is why I believe in what Malakye does for job seekers and why Chad does what he does. There are lots of job sites out there and we all use them. However, none of them have the founder and owner facilitating events telling you IRL* that the struggle is real all the while encouraging you to trust yourself as to choose your own path in life. He doesn't harp on how great a product Malakye is - he simply says to use the site as one of the many tools you'll use to make your dream career a reality.

There was nothing magical about what Chad Mihalick said in the Shmooz career strategy group discussion that day. However, inspired by the individuals working their way through that room, I'm inclined to believe that if we apply those words of wisdom to improve our attitudes and mix it with the community building platform that Malakye offers then career magic is simply bound to happen. I know it has for me.