Utilizing the parallel link design that Canfield Brothers has been refining since the late ‘90s, CBF™ “balances” driveline forces by pointing them through the Center of Curvature (which the formula focuses in a very finite space on top of the chainring, while on most suspensions it migrates over an extremely large area) and into the Instant Center throughout the entire range of travel. The result is the most efficient yet active pedaling platform possible, completely independent of sag, travel and both drivetrain and braking forces.

“Most suspension designs focus on the Instant Center,” said Chris Canfield, suspension expert and co-founder of Canfield Brothers. “And they are only efficient in a very finite part of travel when chainline forces are balanced with that point, hence the reason for recommended sag. The potential of designing around the Center of Curvature has been largely overlooked. We were so excited when locked onto its potential nearly a decade ago, that we referred to it as the ‘god spot.’”

CBF™ is already  incorporated on the Balance and Riot in the Canfield Brothers line, all-mountain bikes that have been praised for their brisk acceleration and climbing ability despite being extremely capable descenders.

“It really is the Holy Grail of suspension design,” said Chris. “Finding the Balance between smooth, active suspension travel and a firm, efficient pedaling platform is no longer the compromise it used to be. Riding is believing.” 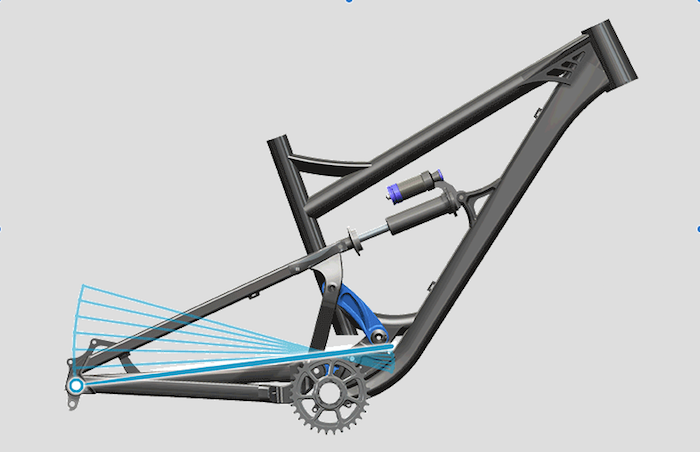 1: THE MOST EFFICIENT PEDALING AND POWER TRANSFER POSSIBLE

CBF™ points the chainline and drive forces directly into the IC throughout 100-percent of the travel by balancing the CC over the chainring, resulting in maximum pedaling efficiency, regardless of where you are in the travel, what terrain you are on or what kind of power you’re putting down. All the power you put into the pedals propels you one direction–forward—allowing the suspension to do its job completely independent of drivetrain and braking forces.

By Balancing the CC on the chainline, CBF™ creates an IC that can travel from a high position to low, forward to back, mirroring the rear axle and keeping the distance between the two more consistent, lessening chain-growth/pedal-kick throughout the travel. As the wheel moves up, the IC moves down, avoiding unnecessary interruptions to the pedal stroke. The chainline pivots with the suspension, around the same point, providing complete isolation of drivetrain and suspension forces for an incredibly smooth ride.

CBF™ decouples suspension and braking forces, allowing the rear wheel to smoothly and efficiently track terrain even under hard braking for maximum traction and control. “Brake jack” is virtually non-existent. CBF has optimal anti-rise (80%-100%) throughout travel, preventing braking forces from causing unwanted squat or rise, maintaining favorable geometry and allowing the suspension to do its job, keeping the rider in control when it often matters most.

CBF™ is not sag dependent. Our formula allows the rider to set up the sag position anywhere in the travel with maximum anti-squat and pedaling efficiency. Because the chainline always points at the IC, there is no way to miss the “sweet spot” in the travel. Of course, your sag and suspension setup will still affect bump compliance and how much travel you use, but if you like to run it soft or it has not been properly set up, you won’t be giving up any pedaling efficiency. You will also maintain efficiency when climbing (a situation in which weight is shifted rearward, causing the bike to sit deeper into travel beyond the normal ideal sag position), riding downhill, through obstacles and rough terrain, or any other variables that require efficient pedaling deeper in travel.

Canfield Brothers produces the most sought after high-performance—and fun—bikes and components available. Having continually refined the principles of suspension design and frame geometry ever since Lance and Chris' first handuilt bikes went on to be Rampage and World Cup tested, the Brothers remain on the cutting edge of what is what is possible between two wheels. Produced in limited quantities to the Brothers’ exacting standards and backed by a commitment to personal customer service and a hands-on consumer direct approach, you won’t find anything quite like a Canfield Brothers bike. For more information, visit CanfieldBrothers.com.