Patagonia Launches Vote Our Planet: A National Campaign Urging Americans to Vote Up and Down the Ballot to Protect Our Air, Water and Soil

Today, Patagonia is launching Vote Our Planet – a major non-partisan environmental campaign urging Americans to vote up and down the ballot to elect officials and support referendums that will defend our planet’s air, water and soil and protect the health and well-being of American families. With the environmental crisis reaching a critical tipping point, Vote Our Planet is designed to rally people in every corner of America to set aside their frustration with America’s divisive political atmosphere and vote purposefully with the environment as their top issue when they head to the polls in November. 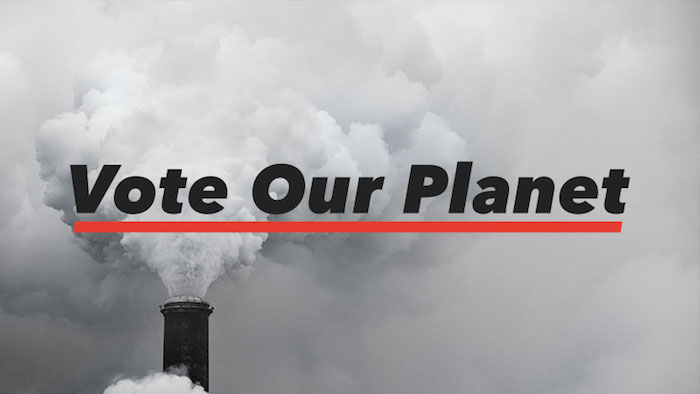 “We can’t let the ugliness of our politics turn people away from voting when the future of our planet is at stake,” stated Lisa Pike Sheehy, Patagonia’s VP of Environmental Activism. “We’re giving voters resources that will inspire and empower them to take action and voice their support for a healthy planet – whether we’re fighting to protect our own backyards or electing leaders who will fight for the future of our planet at the international level.”

Patagonia has committed an estimated $1M for the campaign, with the goal of getting people registered to vote, informed about local and national issues, and inspired to vote for environmental priorities up and down the ballot. This investment includes $200,000 in support of partners like League of Conservation Voters and Headcount to help in their efforts to get out the vote.

In the coming weeks, Patagonia’s 29 U.S. retail stores will each be hosting two in-store Vote Our Planet events: one on September 27 to celebrate National Voter Registration Day and another in October featuring voting resources, partners, and educational materials to empower and educate voters. The stores will provide voter guides for customers outlining each region’s candidates and ballot measures. These events will allow people to discuss, unite and take action around common values tied to local and regional elections.

“In the United States, only 60 percent of eligible citizens voted in the 2012 presidential election and of those, many voted only for president and left the rest of the ballot blank,” said Patagonia founder and owner Yvon Chouinard. “Many young voters feel disenfranchised and disillusioned by politics. But if they voted in full force, and voiced the urgency of the environmental crisis, politicians would have to take their issues seriously.”

In addition to national messaging, Vote Our Planet will highlight 13 specific, regional environmental issues that voters will confront in this election – decisions such as solar power initiatives, pollution regulations, and preventing new pipelines as well as grassroots organizations working to find solutions to existing environmental problems. Patagonia has long supported organizations working at the ground level on each of these ongoing, local campaigns – and now Vote Our Planet will provide a heightened platform to build awareness through Patagonia sales and marketing channels. Over the years, the groups engaged in these 13 critical local fights have received a combined $900,000 through Patagonia’s environmental grants program

As part of Patagonia’s total investment in Vote Our Planet, the campaign will take over the New York Times mobile website and the entire Tumblr website – on Sept. 12 and again on Nov. 7 and 8 – with provocative images and videos and powerful statistics that describe the threats facing our air, water and soil and show how we can make positive change and protect our planet. Patagonia is also dedicating catalog space, email newsletters, blog posts, store displays, and all of its social channels to help spread the Vote Our Planet message.

The Vote Our Planet page on Patagonia.com serves as a hub of information where guests can register to vote, sign up to receive local election information, and get voting updates and reminders via email or text. Voters can educate themselves through links to nine organizations and websites – League of Conservation Voters, Sierra Club, Ballot Ready, Next Gen Climate, Change Politics, Grist, Headcount, TurboVote, and Politico - that provide materials about candidates and ballot measures so that they can cast informed votes on Election Day.

“Voting is the simplest form of direct action – and now, more than ever, it’s crucial that American citizens exercise their power to vote for leaders who are committed to reducing greenhouse gas emissions, defending clean water, and protecting our country’s most precious natural resources,” said Pike Sheehy.

Founded by Yvon Chouinard in 1973, Patagonia is an outdoor apparel company based in Ventura, California. A certified B-Corporation, Patagonia’s mission is to build the best product, cause no unnecessary harm and use business to inspire and implement solutions to the environmental crisis. The company is recognized internationally for its commitment to authentic product quality and environmental activism, contributing over $78 million in grants and in-kind donations to date.