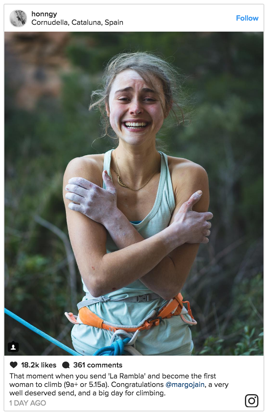 Petzl athlete Margo Hayes became the first woman to send a confirmed 5.15a with a successful climb of La Rambla in Siurana, Spain.

“I am overwhelmed and humbled by the support I’ve received from the climbing community, and my family and friends near and far,” Hayes shared on Instagram. “None of us achieves our dreams alone, we do so together, and build on those who have come before us.”

“La Rambla has long be regarded as one of the most classic 9a+ or 5.15a test pieces, with only the most elite climbers having ever been able to clip the chains. Upon sending La Rambla, Margo added her name to the same list as Chris Sharma, Alex Megos, Adam Ondra, as one of the world's most elite climbers,” said Dave Burleson, Petzl athlete manager. “More impressive than the send itself, is Margo's incredible character. Margo quietly sets hers goals, sticks to her training, and constantly exudes a pure love of climbing. As climbing becomes increasingly competitive, it's inspiring to see Margo epitomize purity and passion in our sport.”

For over 40 years, Petzl has developed innovative tools and techniques used by those who work and play in the vertical world. Today, the Petzl brand is closely associated with adventure, exploration, rescue, and many notable exploits in the worlds of rock climbing, caving, and alpinism. In the professional market, Petzl is a world leader in work at height, fire and rescue, and tactical equipment and techniques. A family-owned business, Petzl is committed not only to quality and innovation, but also to giving back to the communities that have made us so successful. For more information, visit www.petzl.com.