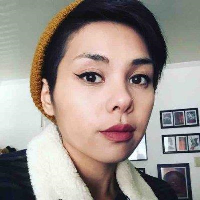 Kirstie has been drawing since she developed the motor skills to hold a crayon in her hand, and ever since then has been stoking up the fire in every possible avenue of creativity that she comes across. Raised by street, skate and punk cultures, she developed her style throughout her early years avidly drawing, painting, screen printing and stencil making, and became known in her 'hood as "that chick that tricks out clothes." Today, her passions lie in illustration, design, and motion graphics, but the DIY culture is still alive and well in her bones. Her existing skills have sharpened, the armory has expanded, and her artistic passion has been fine tuned for creative strategy, problem solving, and compelling content creation.

Kirstie’s work has been showcased in group shows which include RAW: Incite, The Chocolate and Art Show SF, AAU Spring Show 2012, and AAU Winter show 2013. As a freelance designer, she’s worked on a variety of projects ranging from local musicians and small business to big accounts such as Red Bull; all of which has contributed greatly to her love of art and design, and to her insatiable hunger to learn. Today, her freelance work exists alongside a full-time gig in the fashion industry, working as an in house designer for the ecommerce startup: Dolls Kill.