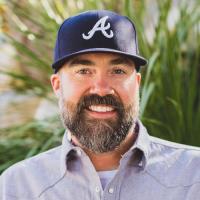 Originally from southwestern Virginia, I’ve spent the last five years working as a Design Lead at McGarrah Jessee in Austin, Texas. Prior to that I lived in Denver where I was a Senior Designer at White Wave Foods and an Art Director at Cultivator.

I began my career, driven by a love for craft and typography, at California College of the Arts in San Francisco with an MFA in Printmaking. Wanting to apply that same level of craft and conceptual rigor to something more lucrative, I decided to pursue a career in graphic design and art direction. The Portfolio Center helped turn my passion for fine arts into a tool for visual communication and brand development.