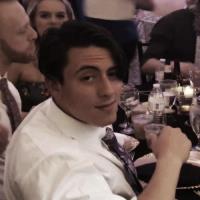 When Griffith is not thinking about behavioral psychology research, he is putting his other passion, graphic design, into practice and training. Griffith has been developing and perfecting his design talents through the use of various digital tools and internet media as a complement to his core academic concentration. Griffith began his career by obtaining employment through school-related marketing and college gatherings and has since built a portfolio of accomplished professional projects and presentations. He even received his first commissions in his hometown, focusing on a local theatrical performance and event posters for the same. Additionally, Griffith worked on the design of Thanksgiving and Christmas card artwork for a local church, which included the creation of their emblem.

As is the case with the majority of college students his age, Griffith was introduced to the classics during his studies, which piqued his interest in liberal works of philosophy and poetry. Among his favorite writers are Bret Easton Ellis and Edgar Allen Poe. Griffith has also discovered a keen interest in delving into the writings of Descartes and Oscar Wilde on a regular basis. While Griffith has no visionary aspirations to be a writer, his studies of numerous classics have provided him with valuable exposure to higher thinking and philosophy.

What does the future hold for Griffith Littlehale? Much depends on how things progress when he completes his psychology degree. Clearly, the field's traditional path is through graduate school followed by applied clinical work. There is also organizational behavior to consider, which is something that industries are examining closely now that diversity in the workplace has been elevated to a top concern for many businesses. That said, the digital design part of the business is also in high demand, and Griffith aims to establish a freelancing and, eventually, a steady alternate revenue stream in that area as well. It never hurts to have more than one basket of eggs.

Beyond his studies, one thing Griffith has seen is how vast and promising the world beyond Toledo, OH is. He intends to travel, see more of the world, and immerse himself in cultures whenever the opportunity presents itself. As is the case with many young adults his age and in their twenties, the modern world is extremely global and international in terms of opportunities. Whereas his parents and peers searched for chances locally and regionally, and certainly never beyond the United States, Griffith and his peers are looking beyond their national boundaries and understanding there are significant prospects in other countries. At the very least, spending a few years in a foreign nation is an excellent learning experience and a refreshing change of pace from the more traditional path taken by previous generations.

Griffith, like the majority of his generation, is concerned about securing his share of the American Dream. A steady onslaught of media headlines about younger generations being priced out of the housing market and similar stories remind him that life is far more difficult for his generation than it was for his parents or grandparents. He does highlight, however, that there are significantly more prospects for success, as well as room for innovative niches and novel concepts. What is possible online for his generation is enormous in comparison to only a decade ago. Griffith sees tremendous potential in the sector, both for psychology and graphic design, and he intends to be a part of it as much as possible.